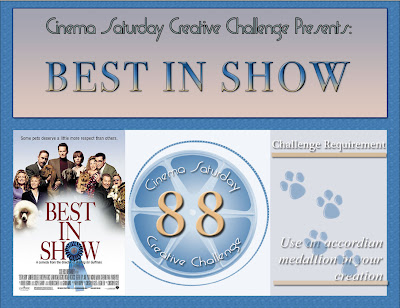 Welcome Everyone to our 88th Cinema Saturday Challenge, where every week we feature a different movie from which to create a card, layout, etc. inspired by some aspect of the movie. This week we are featuring the 2000 Golden Globe nominated movie: "BEST IN SHOW" which is a docu-parody with an all-star cast. This movie is hilarious and is a comedic parody of documentaries and shows the underbelly of a dog show :) There are so many fun themes in this movie: man's best friend, congratulations cards, best in show themes, etc. We thought it would be fun for the challenge requirement this week to create a paper accordion medallion to have in our card/creation. Kelly Lunceford totally rocks the paper accordion medallions and has created a tutorial on how to make them or even check out this video tutorial on how to make them on Youtube. If you haven't seen this movie - get ready to laugh - it is so understated and the acting by Eugene Levy, Christopher Guest, Jane Lynch, Jennifer Coolidge to list a few is HILARIOUS! We hope you will join us this week and play along with us! 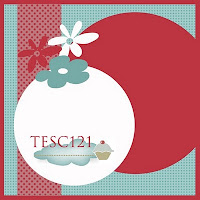 I love this movie! That's all I can say! I LOVE LOVE LOVE the acting and I always just crack up at the subtlety of the humor and nuances of the actors (not to mention that the doggies are so cute!). I think my two favorite character's in this movie is Jane Lynch's character (she is simply hilarious) and Eugene Levy's character who has two left feet (no, for real he has two left feet! :) I think one of my favorite moments is when he had to walk or "show" his cutie terrier around at the end and he was nervous because he had to walk with grace without tripping on his two left feet (lol!) but he did it and not to give away the movie - but let's just say the terrier's parents were so happy! So inspired by Eugene Levy's character's accomplishment of walking and showing his dog with two left fee, I created this card with the sentiment: "So dog-gone happy for you" from the Pet's Place stamp set from Taylored Expressions and used the papers from the Pet's Place Project Pantry. I paired it with this cutie little doggie who looks like the terrier from the movie to me :) The sketch is from Taylored Expressions Sketch Challenge #121: 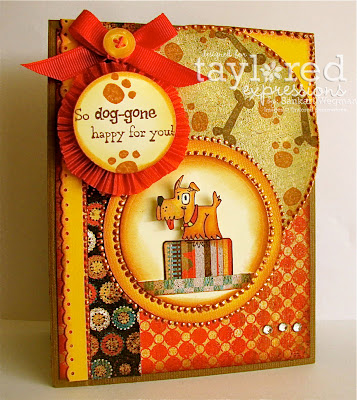 I created a little stand for him and used some dimensionals to pop him up. The background is stamped with the cute paw print and bone image and of course I had to add some liquid pearls :) This movie is just so much fun to watch and I hope you have a chance to play along with us this week!!! Check out the Cinema Saturday Creative Challenge blog for more details!

Love this card the dog is cute and the paper you use is so cute also.

Well that is one dog-gone CUTE card!! Love it! Another movie I've never seen - wonder if I'll watch it and then NOT make a card, just like The Holiday! Grrr, I'm such a dope. :-) BTW - did you see our man Johnny was on the Letterman repeat last night?? I drooled enough for the both of us! :-)

This os os Dog-gone cute! CR! Just adorable. Love the dog the sentiment and your take on the sketch. Fab!!

WOWZERS!!!! Gorgeous card!!! So stunning! LOVE the colors and the all over design! It's just so wonderful *sigh*
Sylvia xx

Your blog has been recommended to us as a interviewee's favorite blog!
We would like to do an interview with you about your blog for Blog
Interviewer. We'd
like to give you the opportunity to
give us some insight on the "person behind the blog."
It would just take a few minutes of your time. The interview form can
be submitted online here Submit your interview.
Best regards,
Mike Thomas

What a great card! Love it.

This is soooo cute, Sankari!! I've been wondering what movie I should watch during my stamp time today and you reminded me of this funny gem that I happen to have in my collection! Can't wait for some giggles...wish you were here too!

the colors on here are just so rich and vibrant! beautiful take on the sketch!

Love the cute pooch...wonderful take on the sketch....Love your paper....

Hi Sankari, this card is so lovely done. The paper is cute.
Really match all colors.

Gorgeous card, I love your style, so much detail. It's fantastic. 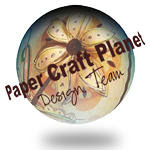 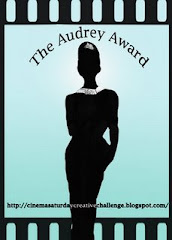